On October 7th, 2015 the International Numismatic Club opened a museum exposition hall at the Bolshoy Afanasyevsky lane in Moscow. The Museum is located in a renovated historic building of Yusupov-Zinoviev Chambers built in the XVII century.

The International Numismatic Club Museum was established on the initiative of Vagit Alekperov, the President of PJSC “LUKOIL”. The museum exposition consists of coins from the personal collection of Vagit Alekperov.

The International Numismatic Club Museum maintains close cooperation with the scientific and museum community and supports research in the field of numismatics. 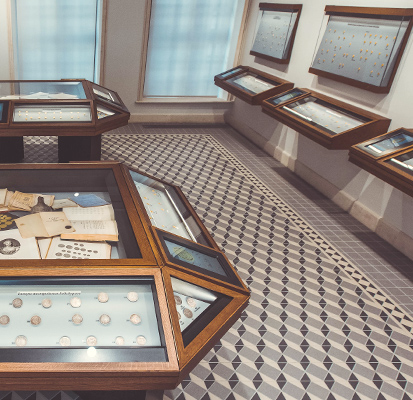 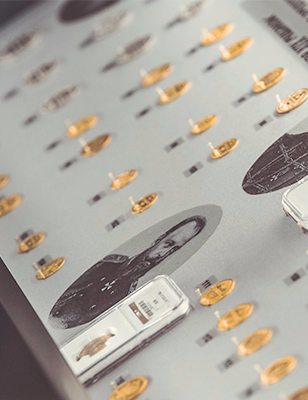 MAIN GOALS OF THE MUSEUM:

In this regard, the Museum plans to organize exhibitions of both public and private collections, to hold conferences, lectures.

The Museum is equipped with modern interactive equipment. The visitors can see the description of the coins on the tablets; view images of the obverse and reverse of the coin photographed in excellent quality and with high resolution. For each showcase the additional information about the era, events and personalities is given.

Zinoviev-Yusupov Chambers, located in the Bolshoy Afanasyevsky lane, is the oldest building of the area, the only large stone chambers of the XVII century to the north of Prechistenka. The fact that its facade stands out for the red line of the lane says that it is here for a long time and has a long history.

In 1685, steward P. Zinoviev built stone chambers and then for more than a hundred years, representatives of noble family Zinoviev were the owners of the building. One of them was Irina Mikhaylovna, the wife of Peter midshipman and the governor of Moscow Knyaz Boris Yusupov. At the end of the XVIII century, the building passed into the possession of Count Andrei Ivanovich Tolstoy, a great-grandfather of Leo Tolstoy. The last owner of the building before the revolution was the brother of Leo Tolstoy’s wife, Alexander Andreevich Bers – actual state councilor, vice-governor of Orel.

The restoration of the building started in 2010, and was completed in early 2012. The Centre of Traditional Culture “Preobrazhenskoye” (head of the project – architect Tatiana Borisova) won the “Moscow Restoration – 2012” contest for this work.

On December 15th, 2015 the President of PJSC "LUKOIL" Vagit Alekperov was awarded with the “Phoenix” award at the IV International Cultural Forum in St. Petersburg. The award was presented by the Minister of Culture Vladimir Medinskiy. The award was awarded for assistance in maintaining the architectural monuments and their adaptation to modern use.

"The museum is private, but at the same time generally accessible. Numismatics is not only about coins and monetary systems of various countries. It is a discipline that allows to understand the history of nations. I find it important that everyone (not only representatives of the professional community) may have access to historical values."

The International Numismatic Council (INC) was established in 1927 to assist in the field of numismatics and related disciplines through cooperation between individuals and institutions from different countries. Throughout its existence, it has been the most authoritative international body of the numismatic community.